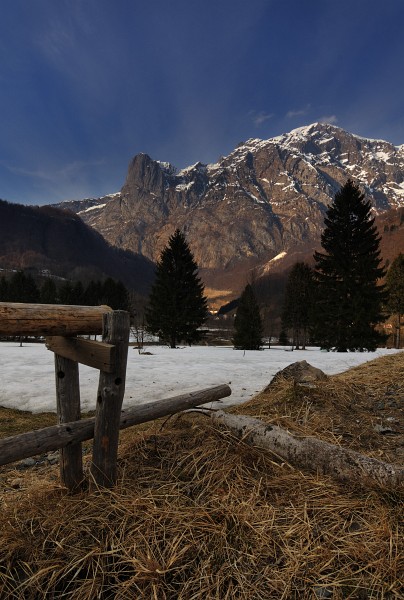 These are two images from a short trip to Italy. The Image of the Day, more or less a type of postcard shot, shows the view to the north, against the Austrian border.

This is a rural area north-west of the small town of Tolmezzo. I have added a map that shows the trip. There are two placemarkers, one for my home in Villach and one for the village of Sutrio.

The Image of the Day was shot just before I reached Sutrio, the other image, the church with the stairway, is the church of Sutrio.

Both images were shot with the Sigma 10-20. The church is an HDR merge of two bracketed exposures. The perspective was corrected in Photoshop, at least for the church itself. I have left some distortion on the stairway. Looks more interesting that way.

The Song of the Day is “Postcards From Italy” from the 2006 Beirut album “Gulag Orkestar”. A fabulous piece of music from a truly fabulous album. See the video on YouTube.

Another image that explodes into my imagination. careening off the walls. It is such an escape to visit your Dailies Andreas. A question, you may have covered this somewhere in depth on your blogsite somewhere and I missed it.... Or you may have strung out the answer, like Hansel & Gretel's bread crumbs but...

I just looove postcards, great work! Couldn't decide which of the photos I would print big.

Maybe the second, I'm a sucker for those nearly monochrome shots.