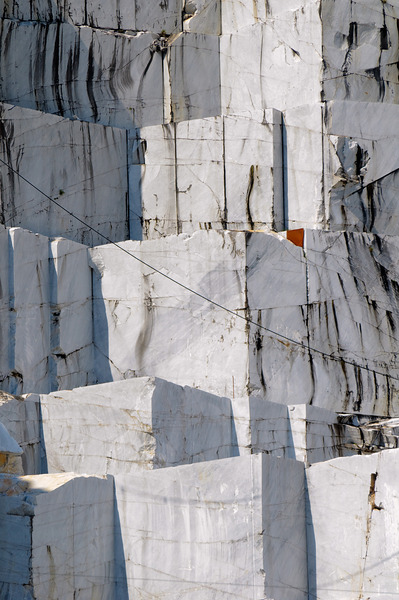 Thursday we began with a museum in La Spezia’s Castello San Giorgio. They have one of the two biggest collections of pre-historic “statue stele” in Liguria, most of them having been found in the region of Luni. Photographing the collection was forbidden, of course I did, but please understand that I don’t want to post the images here.

La Spezia is an ugly city with a population of roughly 100,000. There is much heavy industry, an enormous caloric power plant, a military harbor and lots of military everywhere. I suppose the city has been bombed heavily during World War II, at least that’s the impression.

After a short odyssey up the hill to the castle/museum (did it ever occur to you that your blind spot for direction signs only goes away after you have found your target?) and the actual visit, we quickly left for San Terenzo south along the coast (that’s where I took the images of the arrows), and then via Lerici and Marina di Carrara to our main destination: Carrara, home of marble, from ancient times to distant future. 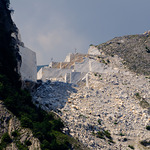 Along the way I spotted the thing on the picture to the left. I have no idea what it is. Remotely it reminds me of Orthanc, though I admit, it is not of black stone but of rusty iron.

Whatever. Carrara was our destination, a small town at the foot of a mountain consisting wholly of marble, and not just any marble, no, the purest and most beautiful marble in the world, quasi the all-time reference of what marble is supposed to be.

The quarries in the mountains above Carrara number by the hundreds, and when you take the winding road, that is used today for transporting the blocks by truck (as opposed to using sledges and ox-carts from Roman times until only 150 years ago), you get the sincere impression, that they are systematically taking apart the whole mountain.

And still, considering the thousands of years, even taking into account the acceleration of the past century, there is so much left, it’s hard to imagine an end to this treasure.

Pretty much at the highest point of the road, at least the highest point that is accessible to the general public, there is a marble museum, a shop and an underground mine that you can visit. We didn’t, we even skipped the museum, but we bought a mortar and pestle 🙂

The interesting thing in Carrara is, that every quarry looks exactly as if the mountain consisted of nothing but marble. It even may, but then the sheer number of quarries is puzzling. It looks like a whole army of ants trying to eat a mountain, from all sides, chaotic, seemingly without system or order. It’s fascinating.

And in the middle of all that, a village. Colonnata, home to the cavatori, citadell of anarchism, home of the famous Lardo di Colonnata, a white bacon, cured with rosemary in troughs of pure marble.

It’s delicious. Not as salty as bacon is here in Austria, and it is served warm on toasted bread. While we ate, I took the image of the stairs, of course constructed from marble as well.

In fact, the whole village is made of marble. There is a big monument dedicated to “Al Cavatore”, and behind it a small church, all made of marble, and there are these two (and maybe more) inscriptions: 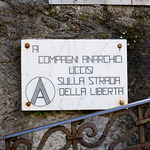 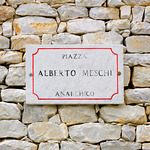 Well, here in the mountains, in this village, then so far off of any city, they found a retreat.

Unlike communism, anarchism never could muster broad support. It’s in its principle, I guess. Not enough organization, too much individualism. Well, having just finished Heinlein’s “The Moon Is A Harsh Mistress”, those marble plates, commemorating the “anarchist companions, fallen on the road to freedom”, somehow touched me deeply.

The image of the truck and the building was made up at the highest point of the street, where the marble museum and the shop are.

The image to the left is an HDR, made from five bracketed exposures. The sun was already low when we stopped at the cemetery, and without HDR, the valley would have been in deep shadows.

Speaking of the cemetery, this is extremely impressive as well. It was the wrong time of the day, I suppose I should be there in the morning, no later than noon, depending on the time of the year. I did not go in, it would have taken me at least an hour, it was already late, light was bad and we had a long way back to Sestri Levante.

The Song of the Day is a cheap pun: Gershwin’s “Too Marvelous for Words”, interpreted by Frank Sinatra. I have it on “Concepts”, this collection of songs that I bought for, I don’t know what, five Euros? May have been a mistake on Amazon’s side, because some days later it was back to $180 🙂

YouTube has the song in a version seemingly taken from a TV show.

Hmm … did I promise a shorter post in the last post? Guess I did. Maybe next time 😄