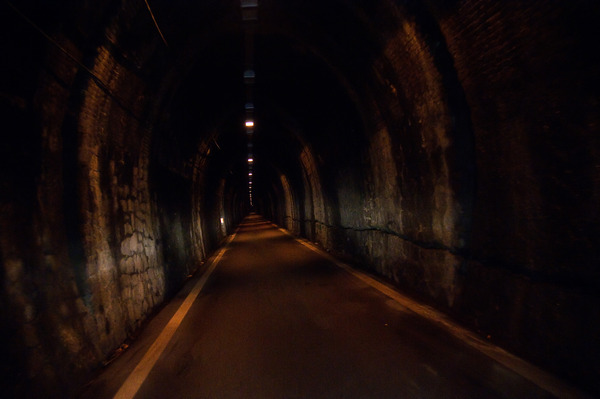 The two villages down along the coast from Sestri Levante, Moneglia and Fornaci, are only accessible from the north via two long tunnels.

Each of those tunnels is actually a succession of tunnels, with the longest one maybe four kilometers long, and the interesting thing is, that they have only one lane. There are semaphores on each side and fixed times when they go green.

Here you see the entrance to the first tunnel in Riva, a part of Sestri Levante with a long beach and some ugly industry, most likely wharves. There is a minimum speed of 40 km/h in the tunnels and a maximum of 60 km/h.

After having arrived in Moneglia, I thought that it was a shame that I had no images of the tunnel itself, so I set the camera to manual focus, high speed continuous mode, speed priority with 1/250s, f2.8 and hoped for the best.

In the next long tunnel I was prepared. I only had to raise the camera through the car’s open roof, press the shutter and see what I get. It was not even distracting from driving. But then, I probably wouldn’t do it with a policeman in sight 🙂

The image with the boats was taken in Sestri Levante, after sundown on our last evening there.

The Song of the Day is “Darkness, Darkness” from the Cowboy Junkies' 2004 album “One Soul Now”. This is some more music that I learned to know via Bill Birtch’s blog. Thank you Bill 🙂

Available darkness and no noise... quiet as... as... Panatomic X on a bright afternoon. Wheeeeee!

Well, the funny thing is, I didn't even induce panic in the car 🙂