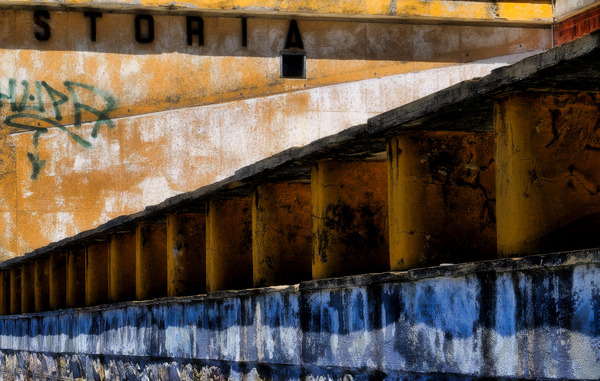 With quite some confidence and without much pleasure I can announce, that there will be no SoFoBoMo 2010 book from me. It’s not that don’t have the material, it’s not that I have technical problems, it’s simply that I run out of time. I have to choose between making a SoFoBoMo 2010 book and making the book that I want to make. I choose the latter.

Thus: There will be a book, the working title is “Sediments”, it is about a layering of disconnected pieces of culture above each other, about how that creates the reality that we live in, but creating such a book takes time.

At the moment I have between 20 and 25 images from Italy that I feel belong into the book. That’s not enough for SoFoBoMo, 35 would be the lower limit, and not all of them are processed to a final form. A book has requirements different from those of a blog. This year, just as with my first book, Tscheppaschlucht, a great deal of work runs into homogenizing the processing styles of the images.

This is the post for Saturday, an unbearably hot day, that I used to sweat on construction sites, and the few photos that I made, were images of an apartment that had been offered to us.

It was so hot, I didn’t even go swimming. I spent the rest of the day in front of my computer, re-processing images already processed weeks before, some of them not yet published. And just as with Friday’s image of the hidden gate, every picture tells a story. Sometimes it’s obvious, sometimes you need to listen, give up for a day, listen again.

This particular image is such a case. Here it was mostly a matter of finding out what spoke to me in the first place, and then cropping to the core. This originally was a vertical format, and while much spoke for it, what remains is a wide-screen horizontal. I was unhappy with the former, I am very satisfied with this one.

The Song of the Day is “Every Picture Tells A Story” by Rod Steward. I have it on the 1993 album “Unplugged….And Seated”. Hear the original version from the album of the same name on YouTube.

Certainly not an easy decision - I can feel with you as I still struggle with the images I've got. The image you show here is certainly worth publishing, but without question it needs the proper framework. An external constraint like Sofobomo can be challenging - especially when doing it for the first time - but also enforces compromises that can be inappropriate, like here. So I will stay tuned and wait for the news and new images.

this image is lovely ... the colour and angles, great cropping all contribute to a dynamic image, in my opinion >>> gina

Great image Andreas! Love all the textures, colors and angles! There really is no easy way to homogenize the processing for a body of work is there? One can try and develop a recipe for post-processing but the main ingredient, the underlying image, can add a great deal of variation to the end result. The process reminds me of the unofficial mantra for the US Marine Corps : "Improvise, Adapt, and Overcome"!. Or maybe I'm just doing it incorrectly? 🙂 Good luck with your publication! Barry

Thanks. Yes, the real problem is the actual image 🙂 In order to homogenize a set of images, you really have to twist and coerce every one of them. It was extreme for the walk through "Tscheppaschlucht" two years ago. I had made the images for my first book in one afternoon, under greatly varying light conditions, on a walk through this canyon, begun in sunlight, ending in rain, with images taken in different directions relative to the sun. Thus even two images made within a minute could look totally different, have different color temperatures, a different "glow", and therefore needed to be brought in line. It was not at all difficult last year. "Urban Dreams II" had a very loose concept, and I enforced this by using different processing techniques. This time the requirements are not as strict as with my afternoon walk, but I want a more homogeneous look than last year. Or maybe not. We'll see. Without time constraints this may as well change when I first try to assemble an actual sequence and then decide to re-work half of the images 😄

An interesting conundrum...homogeneous. On one hand, it might become repetitive; on the other, cohesive so we look more closely for the differences. "Heterogeneous" might be interesting, given your concept. I look forward to seeing this book develop!