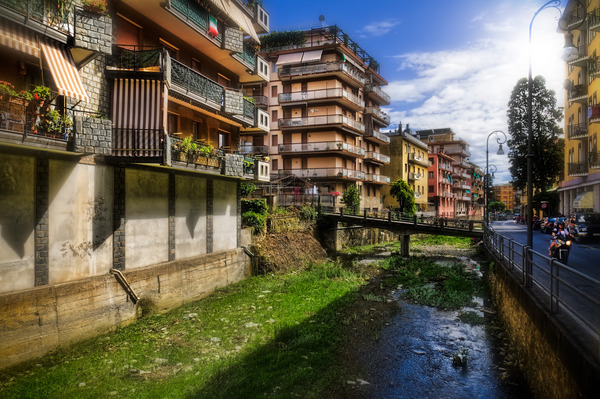 It’s Sunday night, already past midnight. I am still in Carinthia because we were in Graz today, about 150 km from Villach, capital of the neighboring province of Styria. We were there for a concert and scenic interpretation of Claudio Monteverdi’s eighth book of madrigals. The “Combattimento” performed live, how much better can it get? Needless to say, it was fantastic.

There’s nothing new on the photography front. I made some images, though I have not even copied them from the camera yet. Maybe I would have had something anyway, but here is one more image from Italy instead.

The funny thing is, during post-processing I did something that I normally don’t do: I deliberately introduced an error. This image is not real. It can’t be. No, it’s not the processing style, of course the colors, the local contrasts, the partial blur, all that are not “real”, but then what is? No, I mean something else. Can you see it?

But then, even though I broke the laws of physics, this image looks exactly like what I remember. In fact it does much more so than all the images that I took in this district of Rapallo.

The Song of the Day is “I May Be Wrong” by Chick Webb and his Orchestra. I have it on Disc 132 of “The Ultimate Jazz Archive”. Hear it on YouTube.

Goodness, I don't see any laws of physics that got broken in this image! Except for the saturated colors, which I love, by the way! I also like the composition. So, Andreas, you'll just have to tell us what law of physics you "broke," lol.

I too am stumped. I've looked and looked but nothing. I'm sure I'll feel foolish when you tell us because it's probably right in our faces. You will tell us won't you?

i think the sun wasn't in the frame when you took the photo judging by the shadows. The street is in shadow, i think the sun was actually behind the building on he right. Love looking at the images on your blog by the way. Thanks

Yes!! Exactly 🙂 When I looked at the image, I had the feeling, that a little more sun would be beneficial. I used a masked Exposure adjustment layer and with a soft brush I faked a sun behind the lamp post. I was prepared to remove it, I just wanted to see how it looks, but surprisingly it fit the mood and looked not even that wrong, so I kept it 😄