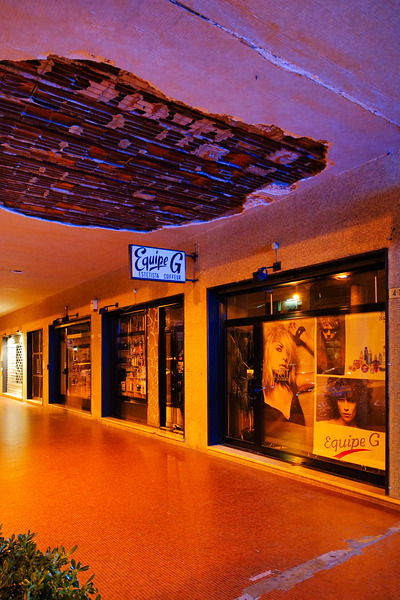 It’s Friday, it was gloomy the whole day (at least as far as I know, most of it I spent in a room without windows, teaching), I had neither time nor much inclination in the morning, and now I am on the train to Carinthia. 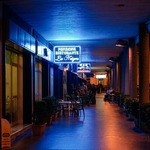 These are the days when I’m glad to have some finished but unused images already uploaded, and that’s how you get to see another pair of images from Italy.

Both were taken the night before our departure, both were taken from the exact same spot. The blue light in the Image of the Day is the light that comes from the bar.

This is how it looks, when you are far from the beach, far from the hotels and the fancy restaurants. Michael failed to keep from smoking, and when he went to the train station for a pack of cigarettes, I joined him and took some night images.

The Song of the Day is “Midnight Special”. I recently bought it on a Van Morrison collection called “Brown-Eyed Girl”, a collection of early hits, but originally it is from his debut album “Blowin' Your Mind!”. Oh, and, that’s pretty much what it does 😄

YouTube has a live version with extra guests from much later.

How odd my reaction to this image... You show us a murky world and above a void. But the floor is shiny clean. Where did it go? Where did the debris that FWOCKED! down and all of its dust disappear to? What droids appeared to lick clean all of the surfaces to pretend that this world was not crumbling? And why was maintenance a higher requirement than repair? Is this how Rome eventually collapsed? Not so much from barbaric plundering but just a gradual inability to discover the resources to, or the memory to... repair itself while life simply made adjustments and averted its eyes from the voids above? What a metaphor you have revealed here Andreas... or what an allegory....

Never thought about it like that, but of course you're right. And, by the way, that is still part of this year's SoFoBoMo effort, the book that has not yet materialized, the book about the clash of old and new, the book that you yourself asked for 😄