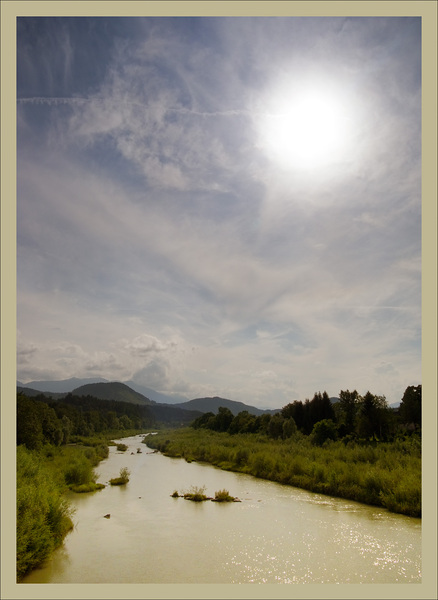 You know this place. I was there in October 2009 for “1093 – Dream River”. In fact, I cross that bridge at least twice a week, and every few years I feel the urge to take a picture 🙂

This time it was not yet sundown, to the contrary, the sun stood blindingly bright and high in the sky. I exposed for the sky, and although in the original JPEG the ground was quite dark, the dynamic range of the LX5 is sufficient to allow brightening it up. What you see here is a fusion of two versions from the same RAW, one over, one underexposed, blended manually with a mask. I’ve color-corrected and saturated both versions separately, and though the result was tonally satisfying, it still fell apart. To tie earth and sky together again, I used a sun flower-colored layer in “Soft Light” blending mode and with low opacity.

I rarely use this technique, but having seen Roland Vögtli’s “Energy Vector” just minutes before, I still had the concept of coloring in my head 🙂

And really, it works fine. What was driven apart tonally, was fused together by a common color tint.

The usual white border does not go well with the idea of the sun being a solitary source of brilliant brightness. Of course I could have just skipped the border, but instead I have chosen a muted color that’s also in the water.

The Song of the Day is again “Dream River” from the 1998 Mavericks album “Trampoline”. Hear it on YouTube.

There is an interesting contrail on the sky, ending at the sun, making it look like an explosion of a rocket. Fine work!

Yup! There was one small cloud that I had to take out, but otherwise the sky behaved pretty well 😄

Thanks so much for mentioning that technique of coloring to bring all the colors and tones of an image together! I've read about it, but have never tried it. Sounds very interesting.