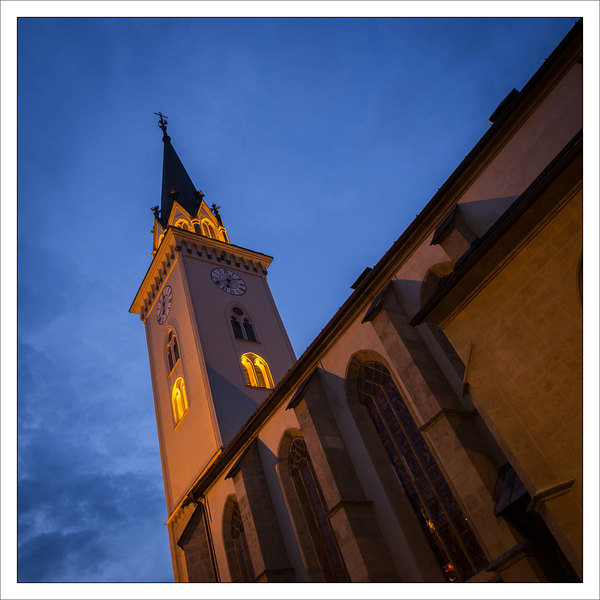 It won’t last indefinitely, but we can play this game for a while.

Today, on a day as bleak as yesterday, I was again shooting at nightfall, this time around the biggest church in Villach.

The image to the left was taken with the Panasonic 20/1.7, all others with the new Olympus 12/2.0, handheld at 1/5 s, well stabilized by my iron grip, my solid stance and … nope, just Olympus’ incredibly well working in-body stabilization 🙂

I really liked the JPEGs from the camera, but in the end I have spent a lot of time tweaking the RAWs in Lightroom. 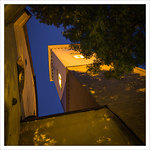 The biggest problem is always the over-the-top blue of the sky, but I’ve also tweaked local contrasts, yes even local color temperature.

It’s almost half a year now since I switched to Lightroom, and I don’t miss Photoshop at all. It’s only under the rarest circumstances that I switch back. There is simply no reason. Almost everything that I used to do in Photoshop or in its various plugins can be done in Lightroom as well, usually even easier. 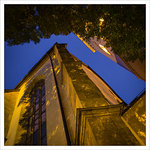 Of course in a way I am restricting myself to straight photography, at least under Lightroom’s generously stretched definition of “straight”. Much of what I did in the past simply can’t happen in that environment. We could say Lightroom covers a smaller creative space than Photoshop.

Do I worry about that? Should I?

I really have no idea. The danger is, to find Lightroom comfortable enough to even accept an image that could (and should!) be driven much further in Photoshop.

Yes, I think I do worry about it and I’ll keep it in mind.

The Song of the Day is “Everybody’s Got A Game” from Solomon Burke’s 1997 album “The Definition Of Soul”. Hear it on YouTube.

You made the same experience with lightroom that I made with bibble/Aftershot: For "straight" photography, they give enough tools to tweak most pictures to our liking. And as I never went that photoshop way in the past, I am more than content. It supports my way of showing how I saw the world and is in a similar way "good enough" as my m43 kit is. I am only envying the Olympus' stabilisation, but in January, when I bought my G3, I could imagine that something worth waiting would happen.

Well, the problem is, that most of my "photoshopped" images came out of playful experiments. I just tried things. I can still do that, but I have to do it consciously, have to change to another program, have to ... which means it just does not happen any more 🙂

I use both the Olympus Viewer 2 software (in a virtualized Win7), and RawTherapee (on 64 bit Linux). I've tried Bibble/Aftershot, but prefer the combination of the other two. Rarely, very rarely do I use The Gimp. I don't "paint" images, I try to make them with a camera.

Oh, at times I do like to "paint". Imo an image is an image, regardless of how I made it. If I like the result, then it'S OK 🙂

I can completely relate. It's like LR has killed PS for me. I feel I've become lazy or maybe it's just a phase; a break from the type of work I would normaly do in PS. Nice series of shots with this post BTW.

Thanks! Good to see that I am not alone with this sentiment😄 Although, boy, is that a relief to not have to create 200 MB files for every single image that I publish!