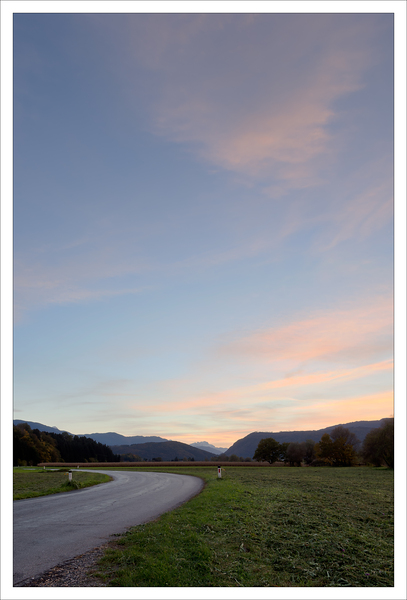 “Calma” means calm in Italian, and that’s what the Image of the Day means to me: the calm of shortly after sundown.

Thursday was just as beautiful as predicted and I spent most of the day inside working, the blinds down to be able to read on my monitor. That’s after I had taken off the three rainy days before. Very bad timing 🙂

Just before sundown I took the car and went out to still catch some light. The first image was taken 50 meters from home. We live a little bit off the main street into Villach, at the end of a small road partly lined by trees. I figured I had to take images very quickly or else the sun would be down behind mount Dobratsch, and so it was. 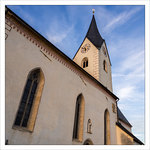 When I arrived at the church of Maria Gail, maybe two kilometers away, a gothic church on a small hill, overlooking river Gail, I just managed to catch a few last rays, and then the afterglow that you seen on the walls in this image.

The Image of the Day finally was taken as a series of bracketed exposures, developed from RAW in Lightroom, exported as 16 bit TIFF images, merged to HDR and tone-mapped in Photoshop CS3. The algorithm used was “Highlight compression”, an algorithm perfectly suited to sunset images.

I could have used Photomatix Pro or some other HDR tool, I have a few, but when I strive for a natural and calm look, I always try Photoshop first.

Yes, very calming for me.

Hi Monte, nice to see you around!