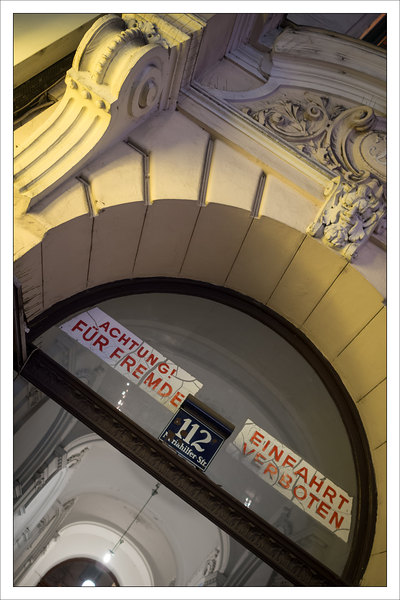 Yesterday, when I left work, there was a small demonstration (meaning a small number of demonstrators and lots of police) outside in the street. A co-worker told me, the demonstration was for a group of asylum-seekers who had camped in a park in front of a big church until police had driven them out.

And then, when I went back for the car, I saw this sign in an entrance:

Access for strangers forbidden. Maybe also for foreigners. You don’t know in German. The most frequently used word for foreigners is “Ausländer”, but colloquially you often hear “Fremde” used without distinction. Ausländer is more formal, but as everywhere so here, the trend towards nationalism in recent history has made both words odious. You wouldn’t want to be “fremd” in Austria, nor would you want to be an “Ausländer”, maybe with the exception of a few rich countries of origin.

I’m not going to accuse the owners of xenophobia or something like that. This sign certainly means only people not living in that house, in bureaucratic German the term would be “Hausfremde Personen”, but there was obviously not enough space for that.

Still, it struck me when I saw the sign and read the word “Fremde”. “The Others”. “Strangers”. “Intruders”. Language is always shaped by circumstances, meanings are not fixed, and the connotations of “Fremde” would make the word almost unusable today, at least for those who care about language and people.

I think there is also a lesson in here: It is not each of the small signs that are frightening, it is the sum of the signs, the sum of the small changes, that at one point make our society inhumane, and once we’ve crossed that border, we will have lost democracy and love and peace and art and beauty as well.

Sorry for being so grim lately 😄

The Song of the Day is “Strangers In The Night” by Ol’ Blue Eyes. Hear it on YouTube.

I think words do matter, and even though one word does little, more of them do have the power to change thinking, and thus also behaviour. In Finland the President traditionally makes a New Year's speech on tv, and this year there was an interesting new word in the speech, "residency society" (in Finnish, oleskeluyhteiskunta), in the context of "we can not afford a residency society", meaning that each and everyone must work to support the society, to keep up the economic growth and the global competitiviness of Finland. This raises the question of whether all human beings are equal, or should all be judged by their ability to work. And this brings to mind The Universal Declaration of Human Rights and the points noted there about rights and responsibilities of each person. I feel that the society should recognize also other values than just striving for economic growth, but in Finland the big thing seems to be competitiviness, competitiviness, competitiviness, and everything else is secondary, such as education, culture, or health care. (In the English press release about the speech the translation of the word "oleskeluyhteiskunta" was "a society in which one can merely exist".)

Yeah. Sometimes I *do* feel like an alien in "my own" country (I don't own any of it, thus the quotes).

Ownership. Another interesting concept. The Owners of the World are greatly concerned with keeping up the fiction that ownership is due to exceptional performance, while in reality it is so often due to inheritance, ruthlessness or outright crime. They are in positions to rig the game for everybody else, and they use their advantage in every way possible. In earlier times we had the concept of ownership connected with responsibility. Not so today. Neo-liberalism has refused any idea of responsibility connected with ownership, and they have greatly succeeded. Even the notion is widely considered obscene now. I think it's time to re-think some basic ideas 🙂

"Owners of the World", that is a good phrase, as it seems that there is a class of people who feel that they are entitled to rule over others, that they are somehow better as human beings, and forget how much luck (and misfortune) affect our lives, and how much each and every one of us is dependent on others, both those who were here before us and those who share the world with us now.

The risk you are talking about is sadly real I feel. Even for an optimist like me. A loss of humanity does lead to a loss of love and peace and art and beauty. There have been periods in history like that before and I dare say there is no reason why we would be immune from repeating such mistakes. As much as the world has changed, human nature has changed little.

I really should answer those comments, but when what you have are mostly questions, answers don't come easily and tend to be long. I'll come back to those topics in the following posts.