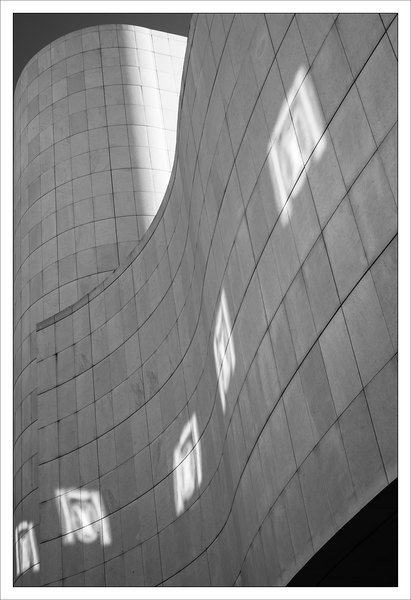 The Teatro Comunale Giuseppe Verdi in Pordenone, Italy is a moderately impressive modern building. It suffers from being crammed into a much too small space, but of course it helps having a point of view from the roof of the building on the opposite side of the street, and having an extremely wide lens makes things easier as well. At least that’s the impression I get from the last image on this page. I didn’t have either, thus I had to get creative. The reflections of the windows were to my advantage though 🙂

The Song of the Day is “Teatro” from Paolo Conte’s 1995 album “Una Faccia In Prestito”. Hear it on YouTube.

Very interesting building and I like the way you have included the reflections to add another dimension.

Oh, the play of reflections on that form are wonderful! Graffiti with light.