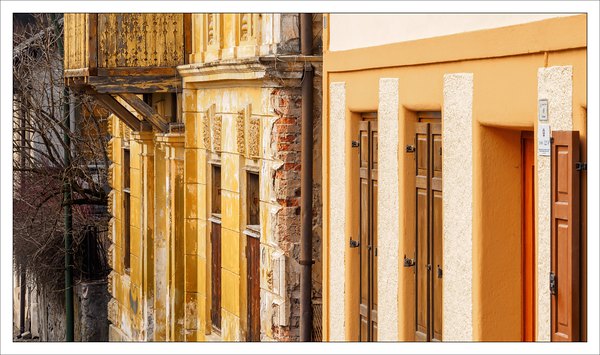 Tarvisio or Tarvis, as it was once called, is a small town just across the border to Italy. Until the end of World War I it belonged to Austria. In my youth it was the place to go for cheap leather wares, bags, shoes and such exotic things as leather jackets.

Then Austria joined the EU and the Schengen agreement about a borderless European core. At about the same time the highway was completed, with a highway connection from northern Europe down to Italy’s heel. Only a fraction of the trains stopped now, none of them for any longer time, and trucks did not have to wait for up to days to get through customs. Tarvisio began to die.

Today it is mostly focused on winter sports. After all, it’s built into a very shadowy part of the valley and snow tends to stay for a long time. Still, much of the former grandeur is gone, much of the old town has become shabby. And beautifully so.

“Old Town” by The Corrs is the Song of the Day. Hear it on YouTube.