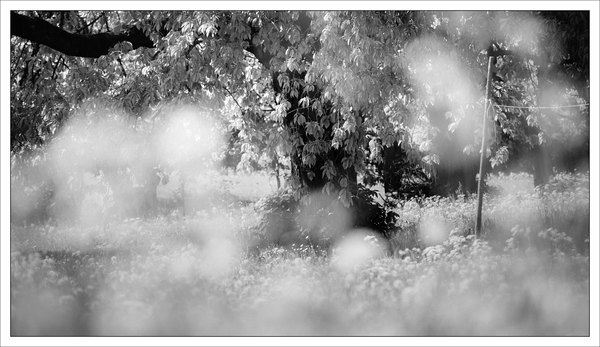 OK, back to Carinthia, back to the E-M1, back to the big, long and heavy lens. Well, at least for Micro Four Thirds that is.

Does it make a difference? Sure, it does. Here we have a dreamy, rural scene, shot wide open through a lot of foreground dandelions, augmented by a pseudo-infrared black and white conversion in Lightroom. You can’t do that with the cheap plastic lens at f5.6 or, as I mostly use it, at f8.

On the other hand, aside from the conversion, the use of foreground bokeh is an effect. I like it, but using it makes the image less dependent on composition. In a way it just looks good all of itself.

I wouldn’t call it a cheap effect (certainly not in a literal sense, when you consider the price of the lens), but when I think of it, working without it takes more creativity.

Well, look at yesterday’s streetlight overwhelmed by the tree. Positioning the light was a conscious decision. I put thought into it and I like the image, because there is much of myself in it.

You know that I have my problems with the concept of “style”, but as it is, you can’t escape developing something like that. Yesterday’s image has more of my style than today’s. Today we see just a technique that I employ a few times a year, when I feel like it or, like here, when the lens permits it.