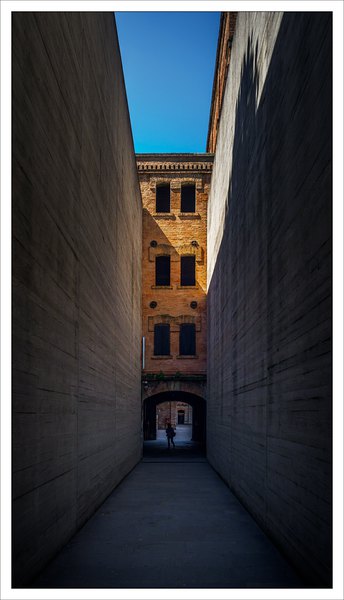 La Risiera di San Sabba, a former factory where rice was peeled and cleaned. This was one of the scariest places in Italy during World War II. The building was used as a concentration camp for non-jewish enemies of the Nazis, and as an intermediate station for Jews, before they were sent on to the Death Camps in the east.

The Italian state has struggled with how to deal with the facility. There were plans to completely raze it, but finally a part of it was turned into a museum.

This is not the original entrance. Neither was the whole facility a concentartion camp. The approach of the architect who built the museum was, to use blank concrete walls for fencing off the prison part. The result looks very different from what it must have looked at the time, but it does a hell of a job expressing the feeling of being locked in.

Andreas, I visited a place like this NE of Muenchen in the mid 60's. It had not been cleaned or restored much and awful. B&W pictures of what was found when liberated. It is forever burned in my memory. Places like these should be kept as close to what was found to remind people not to allow it again.

Well, I've seen Auschwitz I and Auschwitz Birkenau a few years ago. Auschwitz I, the former Austrian army barracks, then turned KZ, still looks much like it must have looked. Pretty nice brick buildings actually, some electric fences, but somehow you fail to recognize the monstrosity. It could be just a normal prison. Auschwitz Birkenau, that's the vast area with the infamous entrance, behind which lay a an enormous area of primitive wooden barracks, and that's the Auschwitz that we know, the "Vernichtungslager", the Auschwitz with gas chambers and ovens. Some very few barracks remained, but other than that it is a vast and mostly empty area. And in a way this is, what makes it so impressive. The empty space makes you realize how unimaginable the horror is. In case of the risiera it is different but similar.