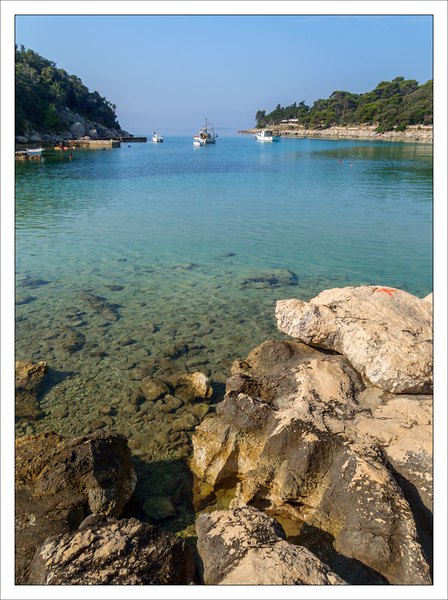 Beautiful, isn’t it? And still it is the same water that people drown in when they try to cross the Mediterranean.

We experience a scary wave of right-wing nationalism here in Europe. The reason is, that people react to migration with fear, and that the reaction to fear is a very primordial function of the brain. Evolutionary that has always been a great thing. Until it stopped being so.

Our reaction to fear is hard-wired deep in the oldest parts of our brains. It is either fight or flee. This reaction always wins over rational analysis. Evolutionary this was a necessity. When the lion attacks, you have no time to discuss it, you have no time to develop complicated strategies. You’re either up in the tree or you’re food.

Unfortunately this is not the way things work today.

We live in an almost infinitely complex world. We depend on food and medication, that are produced by machines depending on energy, depending on power lines and power stations, depending on an industrial capacity to mine copper, to refine it and to form it into wires, depending on a transport system that ships ore to where it is processed, cables to where they are spanned, machines to the factories that use them, products to consumers. We rely on an economic system that incentivizes otherwise unrelated people to work together and keep all that running.

Have you ever thought about what would happen if we had a major war and lost electric current for years?

Well, you would lose access to Wikipedia, to the whole knowledge collection that is the Internet. You would lose access to all your e-books, your Spotify account and its music, Youtube, all of your photographs (assuming that any paper pictures burned away with the rest of your house), everything you had ever written on a computer (when was the last time you have not?), in other words: most of your memories, most of your knowledge.

So would everybody else.

Sure, we’ve all been to school, and I can remember that wonderful moment in math when our teacher showed us how to derive Einstein’s solution to special relativity. I sat there at the tender age of 18, sat in a math class and I understood Einstein. I could solve systems of differential equations. The mind! That’s where knowledge is, right?

Wrong. I can’t do any of these things any more. What my education has left me with, that’s a general idea of how these things work. If I need them (I never do 😃), I can always google them or look them up in Wikipedia.

No, we can’t allow our civilization to slip away. As a species we are programmed for war and as a complex interdependent system we are damned to peace. It’s really complicated and almost every solution for almost every problem today requires cool, rational thinking and a deep understanding of a tangle of relations that’s too big to fit in anybody’s mind.

Instead we make gut decisions and lie to ourselves when our “solutions” turn out to be inadequate.

I read an article at the Guardian today. It was about hog farms flooded by hurricane Florence, and about the broken dams of some of the lagoons holding excrement.

Yet the North Carolina Pork Council argues that activists overstate damage in order to cause alarm. “While we are dismayed by the release of some liquids from some lagoons, we also understand that what has been released from the farms is the result of a once-in-a-lifetime storm and that the contents are highly diluted with rainwater,” the council stated on its website.

Once-in-a-lifetime? Really? I’d be inclined to bet against it 😛

But that’s the problem. Fear, flight and denial. May the problem go away!

And that’s also how politics work today. Populism fosters fear to control the masses and let them decide against their best interest. That’s how fascism worked, and although the method has occasionally been applied by the left as well, the right has developed it to absolute mastery, while people like Steve Bannon do their best to spread its use.