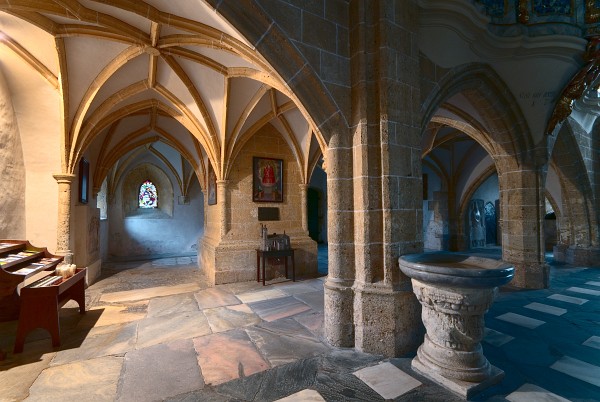 Back to the normal routine, this is an image of today. Well, in a way it is an image from the past, but at least I took it today, and I did so in the church of Maria Saal in Carinthia. Originally this church was from the 8th century, heavily modified in the 15th century, and finally rebuilt from 1670-1674 after a fire.

Today is a drab day with high fog or low clouds, not that it would make any difference. I had to wait for an hour from 10:00 to 11:00 in the morning in Klagenfurt and I decided to drive out to nearby Maria Saal for some images. The images from outside are nothing spectacular, the low light and the comparatively bright sky more or less spoiling them. We’ll see if I can get anything out of them in B&W.

At first I had not even intended to go in, but as from the outside there was nothing to see that would mandate an image of the day, I finally did. I knew what this particular view would look like, I already have taken almost this exact shot, only then with a Kodak DX7950, and sure enough all fell into place.

Initially I was tempted to use the image as it had come out of the camera (I always shoot RAW + Fine JPEG), but after some playing around in Photoshop I decided that I could get out more of the tones when working on it.

Contrasts in the bright part and the dark part are handled differently, and within the bright part the zones of the floor, the texture on the wall at the left border and the niche with the window got special treatment as well.