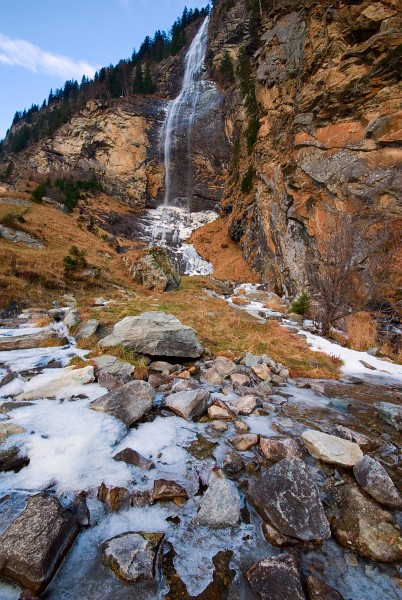 Today I was in a Valley called “Maltatal”, that is famous for its numerous waterfalls. Two of them are not accessible in winter (yes, we have no snow, still, it is winter), one I have seen today, two are left for the next days.

This particular one is called “Fallbach Wasserfall”, which is funny, because it means “falling creek waterfall”. How many times can water fall?

It’s a beauty and it is, with a total height of 200 meters, Carinthia’s highest waterfall. I was there half an hour before sundown (not that you would see anything of it in this valley) and stayed until exposure times at f11 reached 30 seconds. The difference in creaminess of the water was not worth it, maybe because the water falls so fast, that it blurs anyway. I could not approach to more than about 20 meters, but I didn’t particularly regret it, because every two or three minutes some more or less big junks of ice tumble down with a thunder. Actually it’s quite frightening.