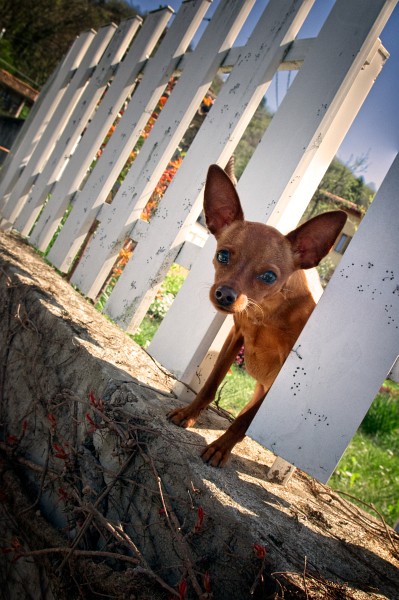 It’s almost a rule: I don’t make good images when I am on a trip. I always feel the urge to document the places where I’ve been, and that’s for a reason: of many past trips years ago I can only remember the places where I’ve taken pictures. Today we were in Friuli, Italy’s north-east province. It’s just a little more than an hour by car from home to Udine, Friuli’s capital.

This particular image, the reflection of clouds in the water of a storage lake, was taken while still at home, and from there it only went down. It was a nice trip, but photographically I was completely uninspired. The dog barked at me when, in order to take a photo, I parked the car a meter from its fence. I kinda liked the tiny guy with the big ears. Of course the 20/1.8 was the wrong lens, because he wouldn’t let me get as near as I wanted, but then again, the wide angle emphasizes its size and that’s OK.

The image is further a good example of what you can do to the images from a modern DSLR. This was harsh light, I didn’t use a flash (the tiny guy was frightened anyway), and the dog was mostly in deep shadow. After heavy Photoshop treatment the image is still good enough for a print.

The Song of the Day is “Every Dog Has Its Day” from Willy DeVille’s 1990 album “Victory Mixture”. Tell me you American guys: what’s wrong with Willy DeVille? You get all his records here in Europe, but in the US you have to import him?? Sorry, no sound sample, no lyrics.

The little guy peering through the edge of his world with no sign of apprehension perfectly illustrates an abstract English word.... "Spunky". I suspect it is a compliment, although to some it might be though of as condescending. Funny how we smile at spunky people, spunky animals... And yet it also has a close cousin in the world of synonyms.. "Tenacity". And that's an attribute at which we never smirk. In fact it seems to define a lot of what's going on in our Presidential race here in the US just now.

Once it was to the victor which went the spoils. But perhaps now it is to the spunky? Hmmmm.....

Nobody should say that one doesn't brush up on English when viewing, err... reading, Photoblogs. 🙂