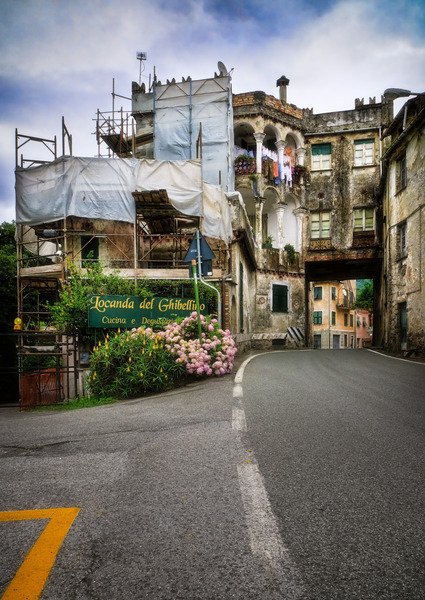 I’m on the train to Vienna now. Well, theoretically at least. Practically I am on the train, but it won’t move. There is some major damage on the station, water and electronics, I hear, thus we will be taken from Villach to Klagenfurt by bus, and then on to Vienna by train.

Time does as only time can: it passes …

Wrong, it’s not Klagenfurt, it’s Pörtschach, about in the middle between Villach and Klagenfurt. I’m already on the train and the train so far does … nothing. No, just now I’ve heard we are about to depart … shortly.

Anyway. Yesterday was so hot, I was swimming, shopping for the weekend, and I had no desire to even try to take an image.

This is an image from June 20. The sky was mostly cloudy, we had some rain, and we used the time for a trip up to the mountains.

The “Locanda del Ghibellino” obviously takes its name from the form of the battlements. It’s the characteristic form of the swallow tail, commonly associated with the Ghibellines, one of the two factions that struggled for domination in medieval Italy.

At one time it had been a matter of allegiance to either the Emperor (Ghibellines) or the Pope (Guelphs), but later it lost all meaning, and when you were out for strife, you just had to choose a side, no matter which one, as long as your opponent was on the other side.

A Locanda is a roadhouse, and thus the Song of the Day is “Roadhouse Blues” from the 1970 Doors album “Morrison Hotel”. Hear it on YouTube.

And in case you worry: don’t. In the meantime the train is on its way to Vienna. It is 50 minutes late, in Vienna I will need a taxi, but it does move 🙂

I very much like this image, and I think it's mainly because of the viewpoint and that you included the yellow painted markings on the road. And those colours, of course. 🙂

Well, I was very unsatisfied with the five images that I made at this place, but the power that is Color Burn suddenly granted me a workable sky 🙂 Yes, I like that image, mostly because it is so utterly bizarre 🙂