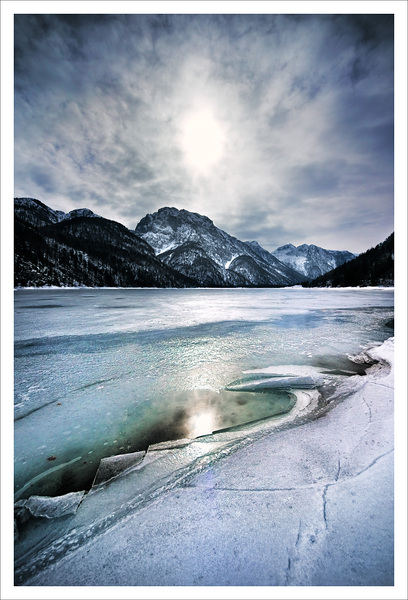 Meanwhile I am on the train to Carinthia, and here it is, as announced, the end of the “Frozen” series. I haven’t done this ever before, posting a series of images consecutively, one image a day, but in this case I found it interesting and convenient at the same time.

It was convenient, because I was busy programming and my mind was so occupied solving riddles, that I could hardly let loose and just see. I have made some images this week, one or two may even fill a gap further down the road, but in general I was glad to already have some material.

It was interesting on the other hand, because this is essentially the same background over and again, and all six images were taken during only 20 minutes, thus it’s the same weather and light as well. I have varied the foreground and the processing, and with that comes variation of the mood. Today’s image is sightly more dreamy, and it was actually the first of the series that I took. This is the kind of composition that I had visualized, the image that I was after.

The Song of the Day is still “Frozen” from Madonna’s 1998 “Ray Of Light” album, and looking for a variation on the video, I found that this is a much covered song.

Here’s for instance a metal version by a band called DISTANCE and, probably more in tune with today’s mood, an obviously privately recorded but surprisingly good voice over piano version by some Barrie Walker. Way cool!

Okay... I waited until the show was over to comment, instead of just gasping after each new image in the series. This is genius Andreas. It is overwhelmingly.... evocatively... narratively... overwhelming. As Saliieri said to Ms. Mozart upon seeing Wolfie's original manuscripts... "Add one note and each masterpiece tumbles, delete one and each conflates." - Or something like that. This is the work of a great artist at the heights of his powers. Perfection in every sense. Congratulations. You've set the bar quite high, even for yourself. Ted

So now who raises bars, huh? If I never ever again find the courage to post an image, I'll blame you 😄